Just how good is Leclerc with a magic marker? Read on for answers to this and other questions you never thought you'd ask.

Being a top-flight driver in any series is about precision, timing, intuition, and knowing the track inside out.

So what happens when you blindfold two top drivers in their respective series - Leclerc from Formula 1 and Newgarden from IndyCar - and challenge them to draw famous circuits from memory?

The answer isn't as slapstick as you might think. Rather annoyingly for those seeking calamitous outtakes, both drivers seemed very competent when we put pens in their hands and blindfolds over their eyes when we caught up with them in Mexico City in October. 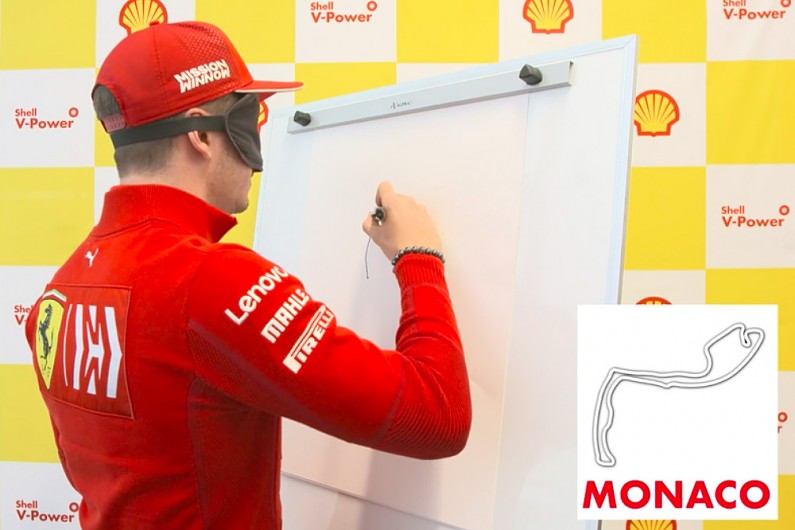 Leclerc deserved the 'podium' for his unnervingly accurate circuits - but Newgarden should be applauded for being the only one of the two to successfully get his track to join up again (though where he decided to take it between start and finish is anybody's guess!)

Thankfully for Josef, this head-to-head is about more than just artistic skill.

The drivers were quizzed on a variety of questions relating to their teams' partnership with Shell, including in their own series, and each other's. Newgarden, it seems, follows Formula 1 a little more closely than Leclerc follows IndyCar.

In the final round, the duo had to identify legendary drivers from their series using only a still, historic image.

A real challenge, particularly for Newgarden - as some IndyCar machines look remarkably similar season-to-season - but one which both drivers gave their best shot. How many of the quiz questions can you answer correctly?

Overall, Leclerc's track-drawing skills just gave him the edge over Newgarden. Make sure you check out the video for the full story.

The London-born Albon, who is in his rookie season, told reporters Thursday that he did not blame the six-time world champion entirely for the crash that cost him his top-three spot.

"Lewis isn't all to blame," said Albon. "There are things I can always do to avoid things like that, but, of course, it was nice what he said.

"He sent me a couple of messages as well. So, all's very good."

Hamilton finished third on the road at Sao Paulo, but was relegated to seventh after being penalised for the clash.

He accepted the blame and apologised to Albon who finished outside the top ten for the first time since he joined Red Bull mid-season.

"It was disappointing at the time, but, on reflection, it was a good weekend for me," added Albon.

"It was one of the first few times, after Mexico as well, where I could mix it with the big boys and there were more positives than negatives.

"In the end, it was just one little crash that kind of ruined the race for me, but on reflection it was a good weekend. The overtaking is there, but most of it has been from coming through the pack with having a bad qualifying or penalties."

Albon's maturity has earned him the second seat alongside Max Verstappen at Red Bull next year, the team confirmed earlier this month.

8 Big PPC Anticipated Trends in 2020
Grand Luxury Hotels - It's time to spoil your loved one on Valentines Day
We offer a unique selection of collectibles Artifacts, Sculptures, Jewels and Paintings from World-Wide Artists to sell Global
Find here new super exclusive sports cars and second-hand luxury sport car for purchase and sale
Luxury Super Yacht for Charter in Phuket for a Day You Never more will Forget
Marine parts in Phuket, Bangkok, Pattaya, Krabi, Langkawi: boating equipment, yacht accessories, marine supplies. Asia's largest chandlery, East Marine distributor online
China (Shanghai) International Boat Show (CIBS) is the longest running and most comprehensive annual boating event in China, its 25th version will be held on March 31th-April 2nd, 2020
Asia Recreational Water Sports Expo 2020 (ARWSE 2020)
Asia-Pacific Boating and China Boating magazines
SEA Yachting is one of Southeast Asia’s leading leisure marine publications. SEA Yachting strives to keep people in the leisure marine industry throughout Southeast Asia up-to-date on technology, events, products and processes that have an impact on their
The Thailand Yacht Show returns to the award-winning Royal Phuket Marina for its fifth edition in January 2020
Agency Sign-up Fill in the form and our consultants will contact you as soon as possible in order to give you all the information you need to sale, rent Your real estate, property
immediate for delivery new exclusive hypercars, megacars and super sportcars so as luxury classic sports cars for sale and purchasing
Sharing with friends or Social Media
Share button by Easy Branches network.