As I work on my project of documenting class="injectedLinkmain" href="https://www.autoblog.com/category/automotive-history/">automotive history via the machinery I find in car graveyards around the country, blank spots in the junkyard record keep showing themselves. I've remedied the lack of discarded BMW 3- and 5-Series cars in recent months, through the E46 and E39 respectively, and now I'm trying to move past the 900 in the Saab timeline. We've got the 9000 covered, and now it's the turn of the 9-3 and 9-5. Here's an '04 9-5 Arc Wagon, found in a Denver yard recently (I shot a 9-3 on the same trip and you'll see it in the near future). 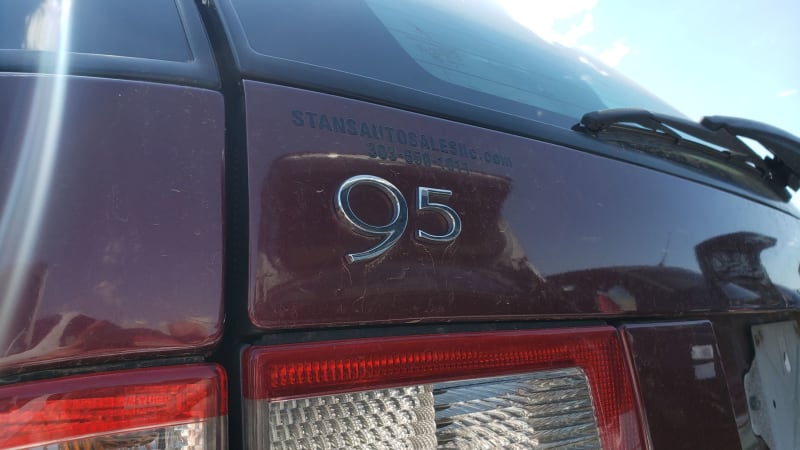 General Motors took over Saab in 2000, after more than a decade of 50% ownership, and so the 9-5 (or 9⁵ if you prefer) had plenty of Opel/Holden/Vauxhall DNA in its cells. Its closest American-market relative (other than the 9-3) was the Saturn L-Series. 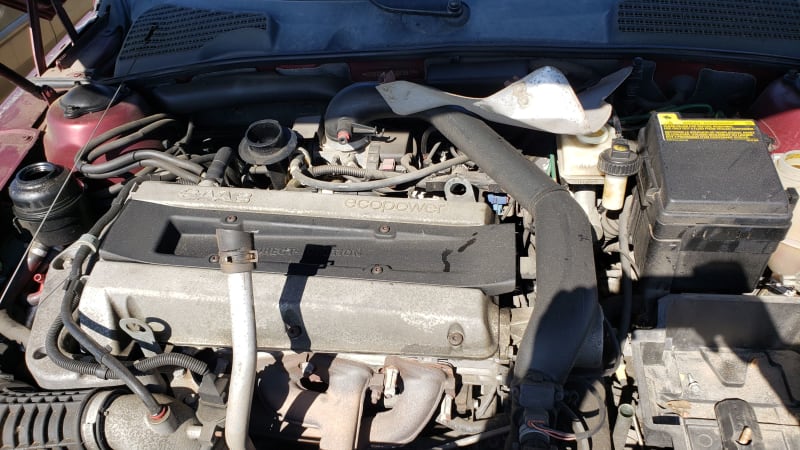 However, you couldn't get a Saturn with a proper Saab engine under the hood, and by "proper" we mean one descended from the original Triumph Slant-4. This 2.3T turbocharged version sent 220 horsepower to the front wheels, making this a nicely quick wagon. 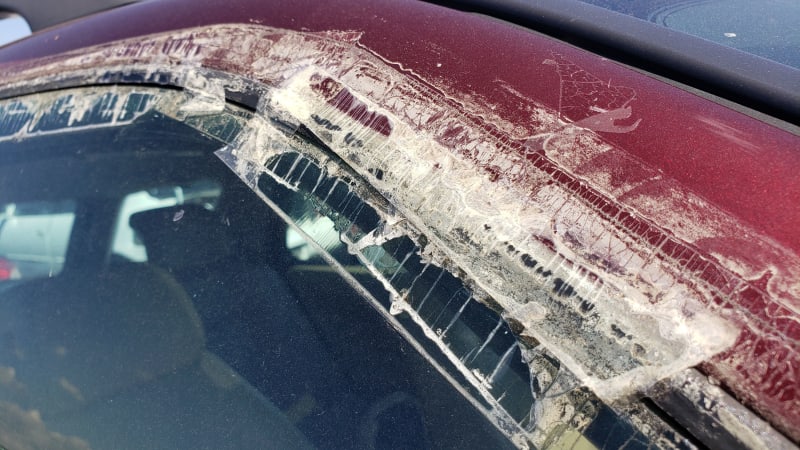 It appears that this car endured some lean times as it approached the end of its road, with the kind of leaky-side-glass repair you do only when you know you're a car's final owner. 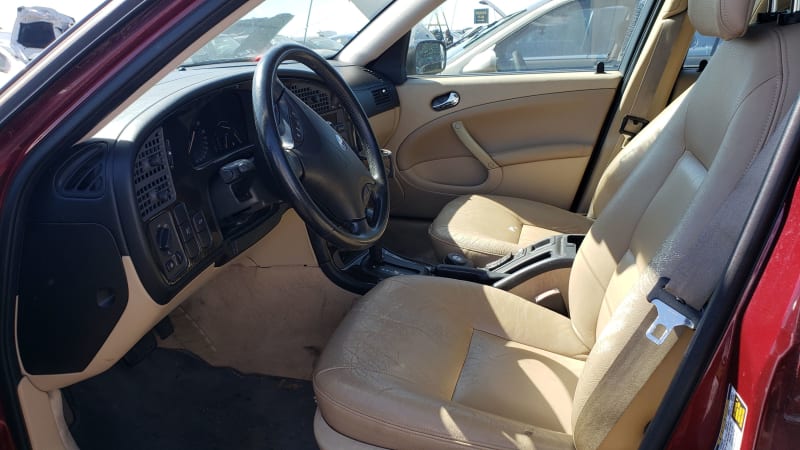 You could get the 9-5 Wagon as the Linear, Arc, or Aero models in 2004. The Aero was the factory-hot-rod version, while the Arc was more about luxury. The leather seats in this Arc still look pretty good. 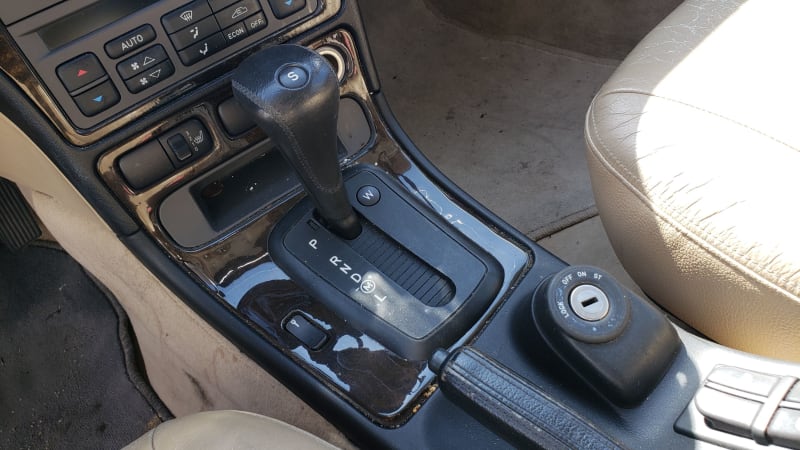 Even though this car's ancestry is more German than Swedish, it has the traditional Saab console-mounted ignition switch. When it came time for The General to sell Subaru Imprezas with Saab badging, however, the ignition switches stayed in the non-Saab locations. At least the Saab-badged Chevy Trailblazer had the switch in the Trollhätten-approved location. 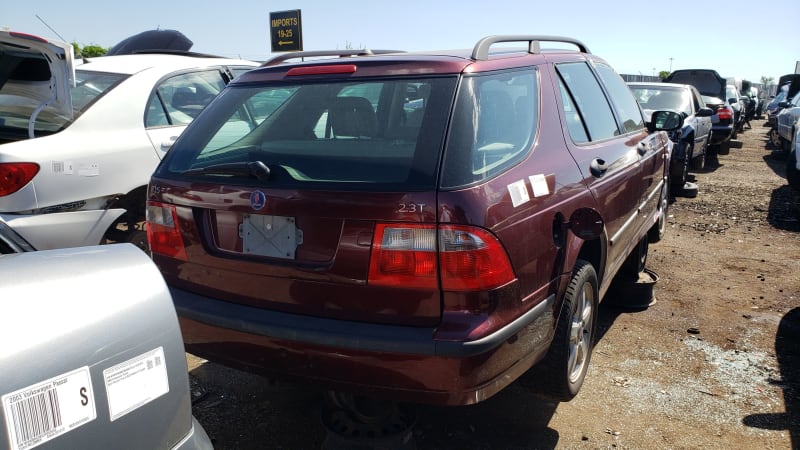 It doesn't look as quirky as the early Saabs, which were born from Flying Barrels, but it stood up well against the competing cars offered to America's ever-shrinking pool of station wagon shoppers.

Built in Sweden by Swedes!

Would this have happened with an Audi wagon?

Father and son accused in Carlos Ghosn escape are denied bail
VIDEO: Why the E92 BMW M3 is Still a Great Car to Buy
SPIED: Check Out the BMW i4 On the Move in New Spy Video
Nissan GT-R gets off-road treatment from exotic car dealer in Netherlands
Here’s How the ALPINA XB7 Differs from the BMW X7 M50i
Best News of This Week
FCA recalling Chrysler and Dodge minivans, Dodge Nitro SUVs for faulty airbag covers
The Hottest Cars You Should Buy This Week
Koenigsegg Is Making Short Films Now, First Video Features Regera
Driving from coast to coast in a Subaru Forester and Volvo S60 on the final episode of 'The Autoblog Show'
Toyota Corolla Cross, Audi Q4 Sportback E-Tron and which beers are like which cars | Autoblog Podcast #635
Win a 600+ horsepower Mercedes-AMG E 63 S Wagon and $20,000
ADVERTISING WEBSITES - VISITORS