Kanye West ‘Genuinely Believes’ He Can Make the U.S. Better as President

In Yeezy we trust? apparently seems to think so!

The rapper, 43, “genuinely believes he can make the country better” as the president of the United States, a source exclusively reveals in the new issue of Us Weekly. “That sentiment is not a publicity stunt. He really believes that.”

West, who announced his run in the 2020 presidential election against and earlier this month, already has a vision in mind too.

As president, the Grammy winner plans to model the United States government on the fictional kingdom of Wakanda from Black Panther “because it’s the best explanation of what our design group is going to feel like in the White House,” he told Forbes in an explosive interview published on Wednesday, July 8.

Kanye West Says He Had COVID-19, Comes Out as Anti-Vaxxer: 5 Revelations

The business mogul also went on to make a stance on controversial issues such as vaccination, which he called “the mark of the beast,” and abortion. “I am pro-life because I’m following the word of the bible,” he added.

While he is still unsure about certain things like foreign or tax policies, West said he wants to reinstate prayer in schools, create a better relationship with China and put an end to police brutality. 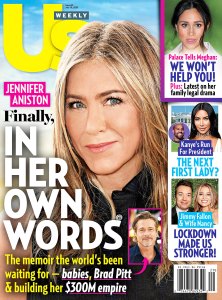 And though some are skeptical about his political venture, West is keeping his faith. He added, “If I win in 2020 then it was God’s appointment.”

For more on West’s White House bid, watch the video above and pick up the new issue of Us Weekly, on newsstands now.